Early life: Moira O'Deorain (née Máire Anne Crowley) was born in Dublin, Ireland on October 31st, 5 minutes after her identical twin sister Evelyn Grace Crowley, to a surrogate mother for Liam and Caitlin Crowley, the descendents of Irish-Australian immigrants who had moved back to Ireland after getting married. Evelyn and Moira were designer babies with custom-editted genetic code, something illegal at the time.

At two years old, Moira was diagnosed with retinoblastoma, a rare form of chilhood cancer in the eye. It was subsequently removed and replaced with a cybnernetic prosthesis that allowed to continue to see and navigate the world while her right eye continued to deterioriate. This was the first of many, many illnesses that would plague her childhood.

Childhood: Moira and her sister Evelyn were raised most of the year in the Republic of Ireland while their parents split their time between Dublin and Adelaide, Australia. The twins attended a private, elite Irish-language Catholic boarding school during the school year and returned to Adelaide with their parents in the summer.

While Moira is a fluent Irish speaker, it's not technically her first language; she was raised speaking English at home until she was two, where she was enrolled in an Irish-language preschool where she was discouraged from speaking English. Since then, she has gotten entirely Irish-language schooling, where she was forbidden from speaking English and required to speak only in Irish. Of course, this lead to problems when she returned home to her Australian-English speaking household; Moira struggled greatly in both English and Irish until she was eleven years old, when she gained an impressive command of both languages, and went on to study Japanese as a third.

Moira's childhood was filled with sickness and ill health. While her identical twin sister seemed to get only the most benign forms of the same illnesses, Moira was frequently unwell, and spent much of her early childhood in and out of the hospital. From rare cancers to stomach bugs, she seemed to be almost constantly under some kind of care; trips to the hospital were a monthly occurrence to her, and gradually became a place that she felt safe and in control, compared to her chaotic and often disappointing home life.

Physical appearance: Moira is 6'4" with an ectomorphic body type. She is very tall and very thin, with most of her height being in her legs, and most of her weight in her hips, thighs, and butt. Her skin is so deathly pale that it's a frequent joke that she glows in the dark; it's marred with marks from small surgeries to remove minor melanomas, and larger scars from various attempts to combat other, more aggressive forms of cancer.

Her face is triangular, with a square jaw and narrow chin; she has two differently colored eyes (left blue, right red) with the former being a cybernetic replacement after being diagnosed with retinoblastoma as a child.

Her right arm is tinted purple from her fingertips to her shoulder, and partway across her chest. There are cybernetic enhancements on her hands and fingers that allow her continued use of that hand, but she cannot lift anything heavier than 15 pounds.

She had a mastectomy done on her right breast; later, she had a lumpectomy performed on the left breast, leaving it extremely misshapen. She wears a silicone insert in a sports bra to make up the difference. It is something she is self-conscious about. 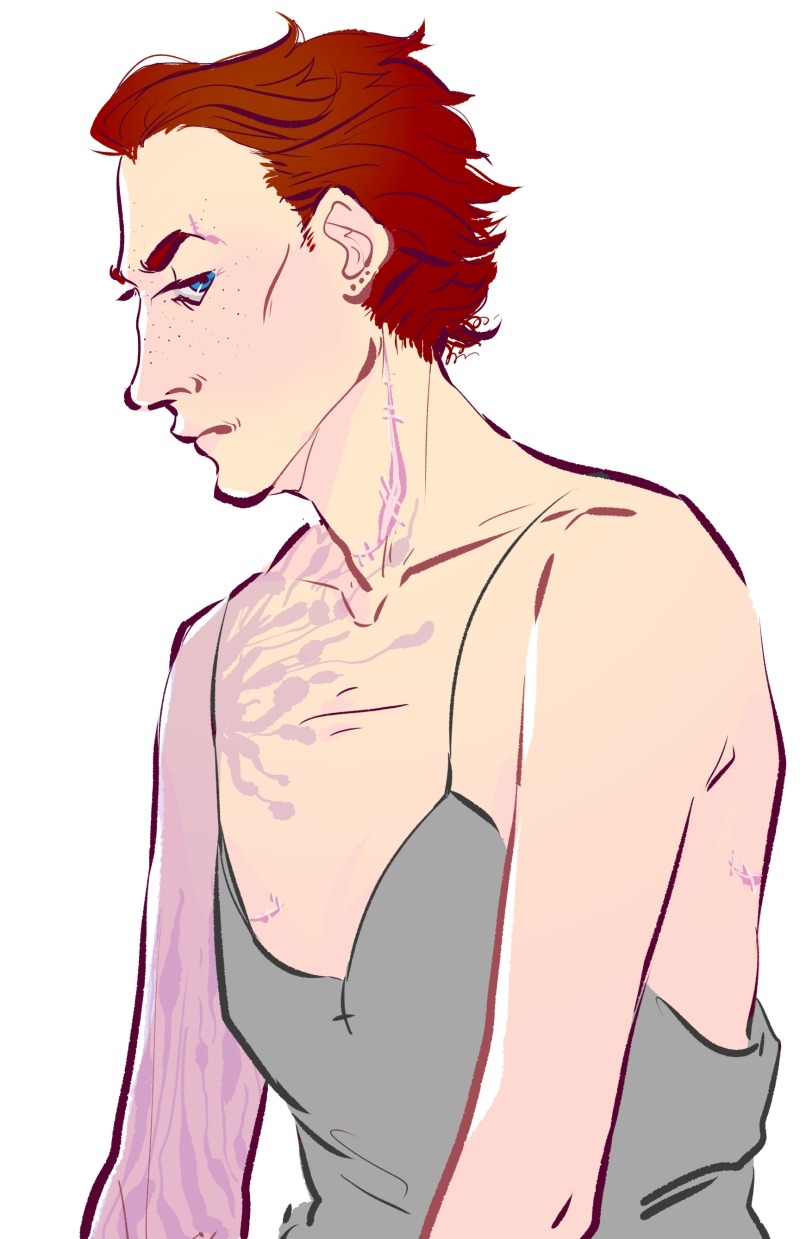 Research: Her research was mostly focused on gene therapy, the practice of transplanting healthy genes in place of missing or dysfunctional genes to correct genetic disorders. She also did work with stem cells and stem cell therapy.

Language: Moira is a fluent Japanese speaker and passed the JLPT at level N1 (the highest level) with a 171 out of 180 score. She is certified to translate academic papers from English into Japanese or Japanese into English. It is her second language certification, with the first being a CEFR C2 certification in English. She also has a B1 in German.

University years: In college, Moira attended the Catholic University of Dublin and double-majored in Molecular Biology and Japanese Language and Literature. She graduated with distinction and was recognized as being one of the top students at her university, having done three semesters abroad (one in New York City, two in Japan (Tokyo and Osaka)) and getting certifications in two languages (Japanese and English) while doing so. Her goal had always been to be a scientist; she was hired to work at Overwatch shortly after it became a peacekeeping organization following the Omnic Crisis, working in their biomedical sciences division.

For her graduate degree, she studied Genetics at the University of New Cairo in Egypt. Her initial thesis was rejected on the grounds of being unethical, but that didn't stop her from trying a second time; she had already worked on multiple studies focused improving gene therapy and had several successful methodologies tested on animals that eventually went to clinical trials in humans.

Marriage: At nineteen years old, Moira got engaged to Richard O'Deorain, a man she met while living in New York City. He was an Irish businessman from the very successful O'Deorain family who instantly fell in love with her from the moment they met. He used their shared Irish heritage to forge a relationship with her, and proposed within six months. They were married before Moira turned twenty; he was 36, once divorced, and had a 14-year-old daughter with his ex-wife.

Upon discovery of their engagement, Moira was disowned by her parents, with whom she had always had a turbulent relationship. They viewed the marriage as a sham by Moira as an attempt to marry into money, and determined that she must have manipulated him into marrying her, rather than the other way around. They ceased all contact with Moira following her engagement announcement and have not spoken to or about her since. This include's Moira's sister, Evelyn, who later got a restraining order taken out on her under false pretenses in a bid to "protect" herself and her own family, Moira's nieces and nephew.

Over the course of their 10 year marriage, Moira stole €29m EUR ($32.5m USD) to fund her research. Their marriage ended when her laboratory was raided and her projects destroyed; her exposé and expulsion from Overwatch occurred shortly after. The truth of their relationship was kept strongly under wraps by Richard: Moira's story goes that he was not upset by the siphoning of the money, and told her that they could rebuild their relationship if she wanted to. However, when he found out that Moira had gotten a hysterectomy and was unable to bear him children, he became enraged and had her removed from the residence.

Shortly after, Richard had their marriage annulled, citing that Moira had in fact married him for money and "admitted so" "in private." Moira, unable to afford any kind of representation for herself, was left desolate and without alimony, and was never able to prove what she said happened to her.

self-experimentation and cancer: Moira's self-experimentation in cellular regeneration with stem cells was ill-received due to the ethical complications of stem cell research. With no way to have grants approved, she turned to private funding, stealing money from Richard O'Deorain and soliciting private donors to fund her experiments. To prove her devotion and the safety of her experiments-- to herself, or to others-- after successful trials on animals, Moira began to conduct experiments on herself. As a result, she began to develop pockets of cancer, which quickly metastasized and spread to other parts of her body.

Blackwatch, Talon, and Oasis: Following her disavowment from Overwatch, Moira was hired by Commander Gabriel Reyes to work at Blackwatch, the covert operations unit of Overwatch. She was given ample funding to continue her research into cellular regeneration using induced pluripotent stem cells, a promising endeavor that would later become the basis for other forms of regenerative medicine within Overwatch itself (though its origin was, of course, obscured, in the interest of protecting their image to the general public).

After Blackwatch was dissolved, Moira found herself once again as alone and scared as she had been following the dissolvement of her marriage, though this time without a convenient out in the form of a man in desperate need of her gene editing prowess in Blackwatch; she worked several under-the-table odd jobs to secure the supplies needed to maintain stability of her condition. It wasn't until she was out of options that she finally turned to Talon, and with a heavy heart; they had been courting her since her original disavowal from Overwatch, and she had been ignoring their call for as long as her condition would allow.

Shortly after agreeing to join Talon, Moira was invited to work as the Minister of Genetics in Oasis, Iraq. The offer couldn't have come at a worse time-- as a result, Moira must keep her Talon involvement under wraps so that it does not interfere with her dream job as an Oasis Minister. While she is, of course, allowed to do her own research unrestricted in Oasis, her other Minister responsibilities include teaching genetics classes at the Oasis University of Technology and Science, a job she takes great pride in. Since beginning work in Oasis in 2072, Moira has been truly in love with the city, environment, and her colleagues. To lose them would be devastating.

mental health treatment: Moira was diagnosed with ADHD and depression as a child, but was not medicated until she was an adult, as her parents did not believe in it. It's suspected she also has bipolar disorder and autism, but she's never been professionally evaluated, and has no interest in it now that she's almost 50-- she doesn't think it would benefit her in any tangible way. She utilizes self-help resources in lieu of professional diagnosis/treatment.